Through its Minority Fellowship Program (MFP), the American Sociological Association (ASA) supports the development and training of sociologists of color in any sub-area or specialty in the discipline. MFP seeks to attract talented doctoral students to ensure a diverse and highly trained workforce is available to assume leadership roles in research that is relevant to today’s global society. Alpha Kappa Delta proudly contributes annually to fully sponsor one Minority Fellow recipient. Learn more and/or apply here! 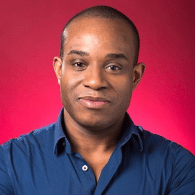 Edwin Grimsley is a PhD candidate at The Graduate Center, CUNY. Broadly, Grimsley studies the intersection of race and racism, economic inequality, urban sociology, and criminology. His dissertation, Colorblind Racism in Marijuana Possession Laws: A Sociological Approach from Development to Implementation, applies mixed methods to examine the development, implementation, and impact of marijuana possession laws in the United States, and in New York state specifically. In this work, Grimsley utilizes archival research to decipher how public and private legal exceptions in the development of marijuana possession laws created and reproduced existing inequalities. Using quantitative methods, he takes particular interest in understanding the effects of race and class-based criminalized policing for public marijuana possession offenses, specifically in employment domains. Grimsley’s research has been supported by a NIH predoctoral award funded by the National Institute of Drug Abuse (NIDA) via the Behavioral Sciences Training program at New York University. Prior to his training as a sociologist, he worked as a case analyst for The Innocence Project, where he investigated cases of prisoners convicted of serious crimes they did not commit, ultimately helping free seven innocent people from prison. During his graduate studies, Grimsley has worked as a qualitative research assistant for the Yale Law School Justice Collaboratory where he interviewed criminal justice actors and community residents across New York City, and as a quantitative research assistant for the Data Collaborative of Justice where he wrote public facing reports on misdemeanor arrests.